When it comes to measuring your business’ SaaS sales performance, it’s essential to have a point of comparison.

It can be an internal comparison. You’d compare your current performance with your past performance to determine whether you’re improving or not.

However, SaaS sales benchmarks can provide an external perspective. With their help, you can get a better understanding of how your business is doing, compared to similar businesses in the same industry as yours.

SaaS sales benchmarks are important because they give SaaS companies a way to measure their success and identify areas for improvement.

They also help SaaS leaders make more informed decisions about their business by providing them with insights into their competitors’ successes and failures.

First, it’s important to note that there is no such thing as a universal benchmark. Every SaaS company is different, so there isn’t one standard that fits all scenarios.

And as we discuss standard values for different SaaS sales KPIs in this article, you’ll find that there can be more than one standard for each of these metrics.

There are some factors to consider that may affect SaaS sales benchmarks, including the following:

Average or standard SaaS sales metrics won’t be the same for every industry. Each of them will likely have different audiences and levels of competition.

For example, let’s say your SaaS solution is in the entertainment industry. You might find a bigger target market (and competition) that you would if you were in the finance niche.

That could very well influence the SaaS sales benchmarks you should be looking at.

Who you’re selling to can also have a big impact on what your SaaS sales benchmarks should be.

For example, let’s say you’re selling a SaaS solution to large businesses. You’d need to look at different SaaS sales metrics than if you were targeting individual consumers and small companies.

The SaaS sales processes for these two different cases can be very different as well. So having the same standard for both of them wouldn’t make a lot of sense.

What’s more, this factor is heavily influenced by your target market. After all, you can’t use an enterprise SaaS sales model if you’re targeting individual consumers, right?

Various SaaS sales models work in different ways. And that also means there are different benchmarks that apply to each of them.

Your SaaS company’s maturity level affects SaaS sales benchmarks, too. Anyone would have different expectations from a SaaS startup than from an established SaaS business that’s been around for a few years.

What’s more, most SaaS businesses are observed (and even required) to have dramatic growth at certain stages of their maturity. As such, benchmarks have been established around those common observations and necessities.

Now that we’ve established the possible factors that can affect SaaS sales benchmarks, let’s double down on the standards you should be looking at.

One of the most useful and most versatile metrics in the world of SaaS sales is the conversion rate.

It can help you measure virtually any SaaS sales ‘conversion’ in your sales process—from website visits to leads to customers.

The thing is that average conversion rates can vary drastically, depending on your target market. For example in the B2B space, it’s generally easier to convert smaller businesses compared to large enterprises.

Here are the benchmarks for some key variations of the conversion rate that you will likely use in your sales process:

The annual contract value (ACV) is the SaaS metric that determines how much money a particular customer brings in annually.

That takes into consideration multi-year deals you may have with some of your enterprise customers. If you have such contracts, you can compute your ACV by dividing your total contract value (TCV) by the number of years in the agreement. Now, the main factor that affects ACV is your target market, particularly whether you are in the B2C or B2B market.

It makes sense, right? B2B buyers would naturally spend more on SaaS products because it’s essentially an investment for them. While consumers only tend to buy SaaS solutions to make life more convenient.

According to a study by RJMetrics, the average ACV for B2B SaaS businesses is $1,080.

The SaaS sales cycle length is the amount of time it takes for a SaaS company to close a deal. It’s usually measured from the first touchpoint with a prospect to when they sign on the dotted line.

Now, there are a considerable number of factors that may affect your sales cycle.

Most obviously, your sales model is one of them. If you have a product-led growth model, the sales cycle could be very short. But if you’re doing enterprise sales, then you can expect the SaaS sales cycle to be long and complex.

Your pricing could also affect your sales cycle length. The higher the price, the longer the sales cycle usually is.

But one factor that can draw a definite line is the ACV of the deal you’re aiming for. The higher the ACV, the longer it’s going to take you to close.

Deals with an ACV of $5,000 and below tend to have an average sales cycle length of around 40 days.

Churn rate is one of the most important SaaS metrics you should keep track of.

It measures how much of your total customer base decreases over time—from cancellations, contract expirations, or other reasons.

The general benchmark for SaaS churn rate is around 5% to 7% annually.

However, there may also be significant differences depending on the maturity of your SaaS business.

According to Messaged, it’s normal for SaaS startups and small SaaS businesses to have a churn rate of 10% to 15% in their first year. Their monthly churn rate could be within the 3% to 5% range.

That’s understandable for fledgling SaaS businesses since they are still testing out different SaaS strategies.

On the other hand, more mature SaaS companies may already have their SaaS strategies in place and are likely to be more customer-centric. Because of this, there’s a higher standard for customer retention.

For larger SaaS businesses with an annual recurring revenue of $10 million and above, the standard benchmark is around 1% to 4%.

Monthly recurring revenue (MRR) is a SaaS financial metric that indicates how much money your SaaS business is bringing in month-over-month.

It’s a great indicator of SaaS sales growth. However, there is no real benchmark for it because SaaS companies of different sizes will have significant differences in terms of their MRR.

What you can compare is how fast that recurring revenue is growing.

This metric measures how much your MRR is growing, considering all possible sources of reduction or additional MRR that may occur during the month.

There are different benchmarks for the net MRR growth rate for each level of a SaaS company’s maturity:

New SaaS companies tend to heavily invest in their growth, and that definitely affects the standard for early-stage SaaS businesses.

According to venture capitalist Tomas Tunguz, a healthy Net MRR growth rate for SaaS startups is around the 15% to 20% range.

Now, maturing SaaS businesses with more than $100 million in ARR tend to focus on achieving profitability rather than growth.

For SaaS businesses at this stage, the standard net MRR growth rate is anywhere from 10% to 15%.

It’s a much more achievable goal since these SaaS companies can now focus on profitability and even their exit strategies.

The functional difference between ARR and MRR is that they often measure aspects of a SaaS company.

MRR is more of an indicator of how well a SaaS company’s month-to-month operations are doing.

While ARR is more of a SaaS valuation metric. Potential SaaS investors look at the ARR when they’re assessing how much a SaaS company is worth.

But just as with MRR, it makes more sense to measure and compare the ARR growth rate rather than the ARR alone.

And like the net MRR growth rate, benchmarks for ARR growth rate vary for different stages of a SaaS company’s growth.

That means having an ARR growth rate of 300% for two succeeding years and 200% for three.

Now, you may be thinking that’s a really tall order.

Well, that’s really what it takes to be competitive in the SaaS industry today.

However, you don’t have to do it alone.

There are a lot of venture capitalists that are willing to fund SaaS businesses with strong potential. And you can maximize that kind of funding to invest in whatever you need for growth.

For SaaS companies that have already achieved profitability and are looking for sustainable growth, the benchmark is a much more achievable 15% to 45%.

This is because SaaS companies at this stage have less pressure on their growth and are more focused on being profitable and sustainable.

Gross margin is a SaaS metric that measures your SaaS company’s profitability and growth potential.

You can calculate it by subtracting the cost of goods sold (COGS) from your revenue, then dividing the difference by your revenue.

A lot of investors look at this margin because it’s a direct measure of how much you can keep or reinvest in the SaaS company’s growth.

And according to Software Equity Group, they use the following benchmarks for a SaaS company’s gross margin:

So if you want to be competitive and have investors look more favorably on your SaaS company, then having a gross margin of 75% or higher is recommended.

The CLV/CAC ratio is a SaaS metric that measures your return-on-investment from your marketing and sales efforts.

Dividing your CLV by your CAC gives you your CLV/CAC ratio.

For SaaS businesses, the acceptable ratio is between 3:1 to 5:1.

Anything less than 3:1 is usually not enough to ensure a significant growth rate. And if it’s more than 5:1, it could indicate that you’re missing out on certain growth opportunities by not investing enough on customer acquisition.

SaaS sales benchmarks serve as an external guide for measuring the performance of your SaaS company.

Sure, tracking your SaaS sales KPIs alone can help you gauge your progress and make data-driven decisions. But benchmarks help you get an objective perspective of how competitive you are in your industry.

But remember that there are a lot of factors at play in a SaaS business. So, there is no single across-the-board standard for each SaaS metric.

You need to take your SaaS company into context. How mature is your SaaS business? Who’s your target market? How are you reaching them?

You need to analyze your SaaS sales data and use SaaS sales benchmarks as a guide. That way, you can make more informed decisions that will help you reach your SaaS business goals.

Looking for more guides to help you take your business to the next level? Check out our blog here. 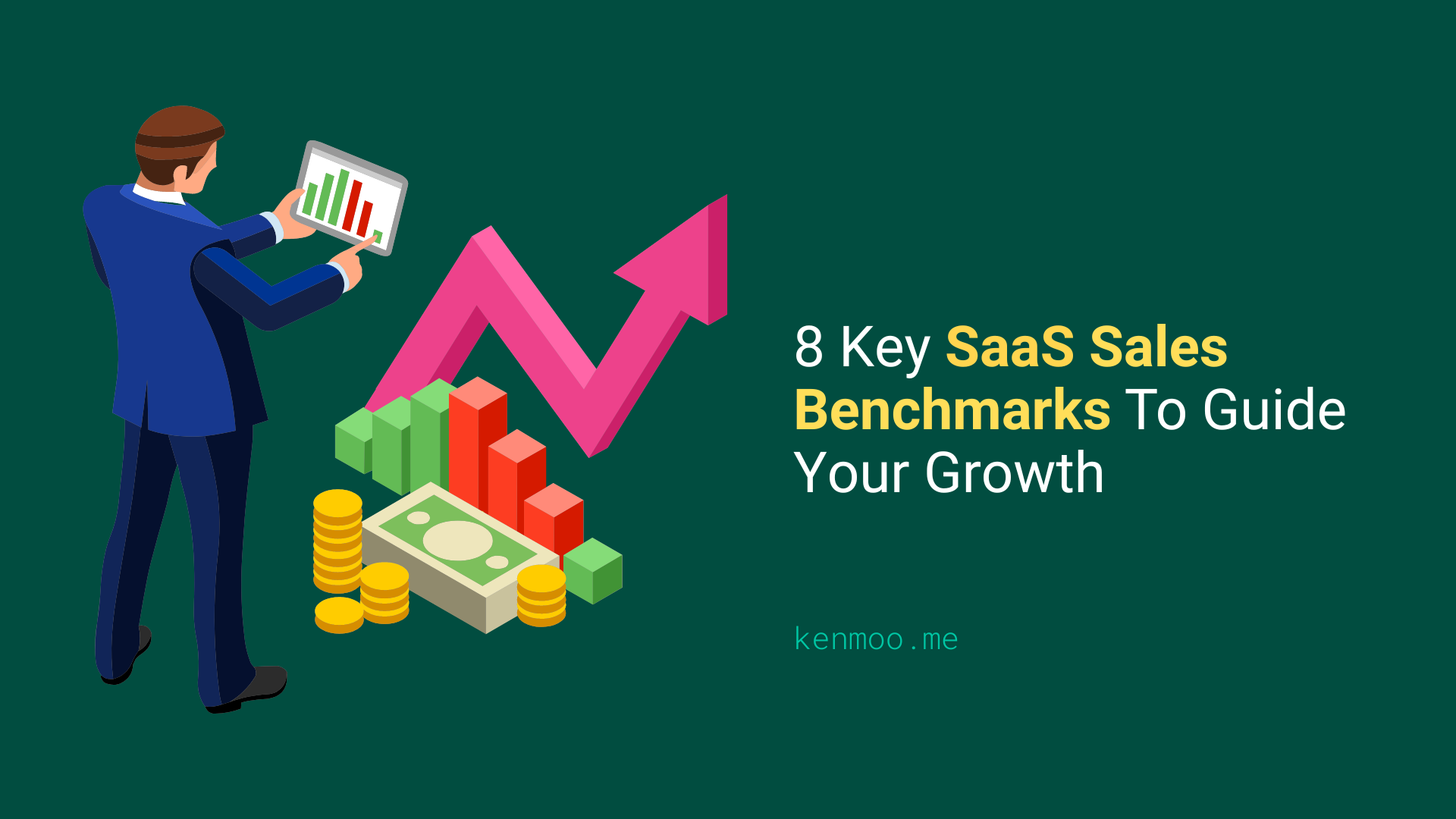