How to Build an Enticing Strategic Narrative for your SaaS Startup Everyone seems to suggest SaaS startups should concentrate on the customers’ “pains.” But what if most of them do not feel much discomfort? They simply get on with it.

Most SaaS companies also tend to focus too much on strategy implementation. They basically put more money into it and hope for good outcomes. They may, for instance, pay Google and Facebook to publicize their business. Others may send out 1000 emails using an email distribution tool. If the first campaign proved successful, they may opt to conduct a second campaign with 2000 emails.

There’s no denying that execution is critical. You must send out emails to attract people in and market your product to raise brand awareness. However, most businesses overlook the strategic narrative in SaaS.

A SaaS go-to-market machine has two main components. You have a strategy and a strategy execution plan. Most SaaS companies would actually benefit from spending more time on narrative strategy.

When you nail your strategic SaaS narrative strategy, you’ll see remarkable outcomes. Your email campaign can become twice as successful without increasing your email count. Your ads are landing better than before, resulting in more visitors to your website.

We’ve outlined what a strategic narrative is and how to create one for your company in the sections below.

What is a Strategic Narrative?

Any firm that wants to tell its own story may do so by using a concept called “strategic narrative.”

A strategic narrative is a story that persuades clients of the importance of a product. It works because it starts with development rather than challenges. It employs stakes rather than issues, and it makes the customers the hero.

When this story is finished, it will serve as a window into the future for the customer. Companies can use this data to differentiate themselves from competitors. As a result, these storylines must be built on a solid foundation.

Brands will impact the public’s perception of the story if there is a clear philosophy behind it. In the minds of consumers, good work will produce true stories. This is, after all, the underlying principle of a strategic narrative.

It’s important to note that this notion relates to storytelling. As a result, brands will tell a story to highlight a market principle that a business adheres to. To make this possible, you must build your strategic narrative around three pillars:

A powerful, compelling brand narrative pierces people’s hearts. The message imprints itself on their minds. It should feel contemporary and make a convincing case for the brand’s relevance.

Recent research looked through 10,000 ads in 2020 and found five features that stood out. Being meaningfully distinct is one of them. The study stated that creative ads produce impressions. It places the brand in a noteworthy and unique way in people’s minds.

Furthermore, it said that organizations with high-quality creative and a brand narrative that differentiates them from rivals will have a competitive edge. It might expand twice as fast as those that rely only on the creative.

Branding is not just the realm of B2C businesses. Unfortunately, their B2B counterparts sometimes overlook its significance.

Do you want some ground-breaking examples of strategic narratives? Consider Netflix. The platform enables you to find your favorite films at Blockbuster before streaming.

Netflix stated in their branding idea that the future is now. It defines its services as quick and inexpensive access to a wide variety of content. Streaming movies and TV shows everywhere was Netflix’s strategic narrative.

Making Yourself Stand Out From the Crowd

Your hook is your strategic message. It’s how you set yourself out from the competition.

Everything about your business gets easier after you’ve nailed down your strategic narrative. It becomes easy to design your website. You can create marketing material and SaaS sales presentations in no time.

So now that you understand the importance of a strategic narrative let’s look at how to create one.

7 Steps to Creating a Story

Understanding the story context is the first step. According to research, our brains perceive businesses as people rather than objects. Each time someone interacts with your business, they are essentially saying, “So tell me about yourself.”

Consider the following scenario: you’re attending a job interview. You have the candidate’s resume, but what matters most cannot be written down. You would like to know what motivates them, how they collaborate with others, and if they can be trusted. You would like to get a feel of who they are as humans.

It may appear unusual at first, but your organization is the same way. The narrative should be set in a human relationship rather than an institutional one. Consumers want to get a feel for your business as if it were a human.

Reciprocity and sincerity are required in human interactions. The story should focus on who you are rather than what you do.

A unified purpose is the foundation of a strategic narrative. This is a common goal that both you and your consumers are striving for. It’s more than just a value proposition for the services you provide. It might be a world-changing quest. It’s the trip you’re taking with them. The connection evolves from buyer to co-founder when there is a unified purpose.

One of the strategic narrative’s functions is to describe how you can achieve the goal. IBM, for example, structured its marketing between 2008 and 2015 around the same goal of “Building a Smarter Planet.” Then-CEO Sam Palmisano outlined how things were becoming increasingly “instrumented, connected, and intelligent.” In a series of papers and lectures, he claimed, the world would grow wiser if intelligence were infused into systems and processes.

The narrative’s second objective is to describe the responsibilities necessary to achieve the common goal. Consider a potluck dinner where each person is ready to bring a unique dish. I’m bringing the main course, you’re bringing the side dish, and someone else is bringing the dessert. Similarly, the potluck represents the common purpose. The story describes who contributes what to the gathering.

Nike’s aim, for example, is to motivate and inspire all athletes on the planet. Nike aggressively encourages individuals to inspire each other. This made it a unified purpose.

The Nike tagline “Just Do It” is an important aspect of the company’s story. It not only contributes to the mission’s motivation but also aids in the definition of the various roles.

Nike is effectively saying, “We’ll provide the shoes, equipment, and apparel; you provide the passion, discipline, and competitive spirit.” It’s a story that extends well beyond Nike’s products.

So, how would you exactly move your common goal forward? The initial step is to put the present market position into context.

To do so, you’ll need to describe what other businesses have done. It’s not about slamming competitors or critiquing their products. The main focus should be on implementing your company’s adjustments. It is critical at this point to distinguish between the old and the new. The audience will be able to see that your firm is creating an evolution story this way.

A tech business, for example, intends to release a new smartphone with four cameras. As a result, it must show that flagship devices are functional, but a new era is on the way.

Apple introduced the Airpods in this manner. Even though wireless earbuds were previously available, Apple employed the “Think Different” approach once more.

As a result, it was able to successfully launch a new product through the use of a strategic narrative. Once again, the narrative given was one of a kind in the market.

In a nutshell, you must tell a story that compares:

4. Demonstrate the benefits to the audience

After describing changes in a new narrative, explain why they matter to the audience. One of the most challenging aspects of executing a strategic story is this job.

You must be crisp here. Inform them that those who interact with the new story will be in the market, while those who do not will lose out on the best.

A well-told narrative consisting of statements instills higher trust in your audience. So be specific while describing the advantages of your company’s new story era. After all, the public is looking for reasons to associate with your firm.

You’ll need a robust and appealing campaign at this point to be effective. The organization’s marketing team is vital in publicizing the narrative.

To affect the future, companies create game-changing solutions. So it’s necessary to create a strategic narrative that details the changes. This structure of the story grabs the audience’s interest.

Buyers want to be a part of something special, which leads to engagement. Brands may create significant stories by using elements of storytelling like the hero’s journey.

In this way, buyers know they may be missing out on a once-in-a-lifetime chance. As a result, they’d be willing to demonstrate a connection with the suggested story.

6. Be consistent with your brand’s DNA

Companies, like people, do not change fundamentally. When a business is started, it develops a type of DNA that lasts for the duration of its existence. A strategic narrative must be consistent with the brand DNA. Otherwise, consumers will view it as fake.

It’s no accident that IBM’s founder, Tom Watson, lived by the mantra “THINK.” The tech giant’s previous sales tactic was based around the idea of a Smarter Planet. It shifted to its present approach centered on the concept of Cognitive Business. Thus, IBM’s brand DNA is built around thinking.

Return to your founder’s initial vision and ethos to identify your brand’s DNA. Walmart’s unique selling point is cheap pricing every day. It’s not the first time this has happened to a merchant.

However, Walmart’s common goal is to improve people’s quality of life, not to cut costs. When he launched the company, Sam Walton claimed “If we work together, we’ll cut the cost of life for everyone.” Walmart’s strategy is comparable to that of other stores, but not its story.

7. Align the company’s strategic narrative among the board of directors

The strategic narrative must reflect the board of directors’ vision. Thus, it’s critical for executives’ perspectives to be in sync. These individuals will make decisions based on their significant market experience.

Of course, you must match this information to the target demographic for the brand. A strategic narrative that has an influence on the customer is one that is effective.

While the target market is unaware that they must follow a new plot, it must be logical. Only then can a successful approach be devised.

Is Your Strategic Narrative Working For You?

It’s never easy to gauge the success of a strategic story. Nonetheless, conversions should serve as the foundation for a more precise investigation. Other SaaS content marketing metrics shouldn’t be ignored, too. Businesses must examine whether a new strategic narrative will result in sales.

A well-executed project will result in faster sales and a lower SaaS churn rate. Additionally, the duration of the sales cycle is a factor. The fewer touch points required to convert the consumer, the better.

When a corporation presents a strong narrative, it takes less work to persuade a customer to buy. Fast engagement and conversions are generated by using the right narrative.

A strategic narrative may give your businesses a fresh, intriguing tale. The creation of content that supports this story is critical for success. A superb content experience aids in the reaffirmation of the strategy. It is also helpful in the generation of the desired perception among the target audience.

We can help your SaaS company develop a content strategy that will engage a wider audience. You can read more of our articles about SaaS marketing here. 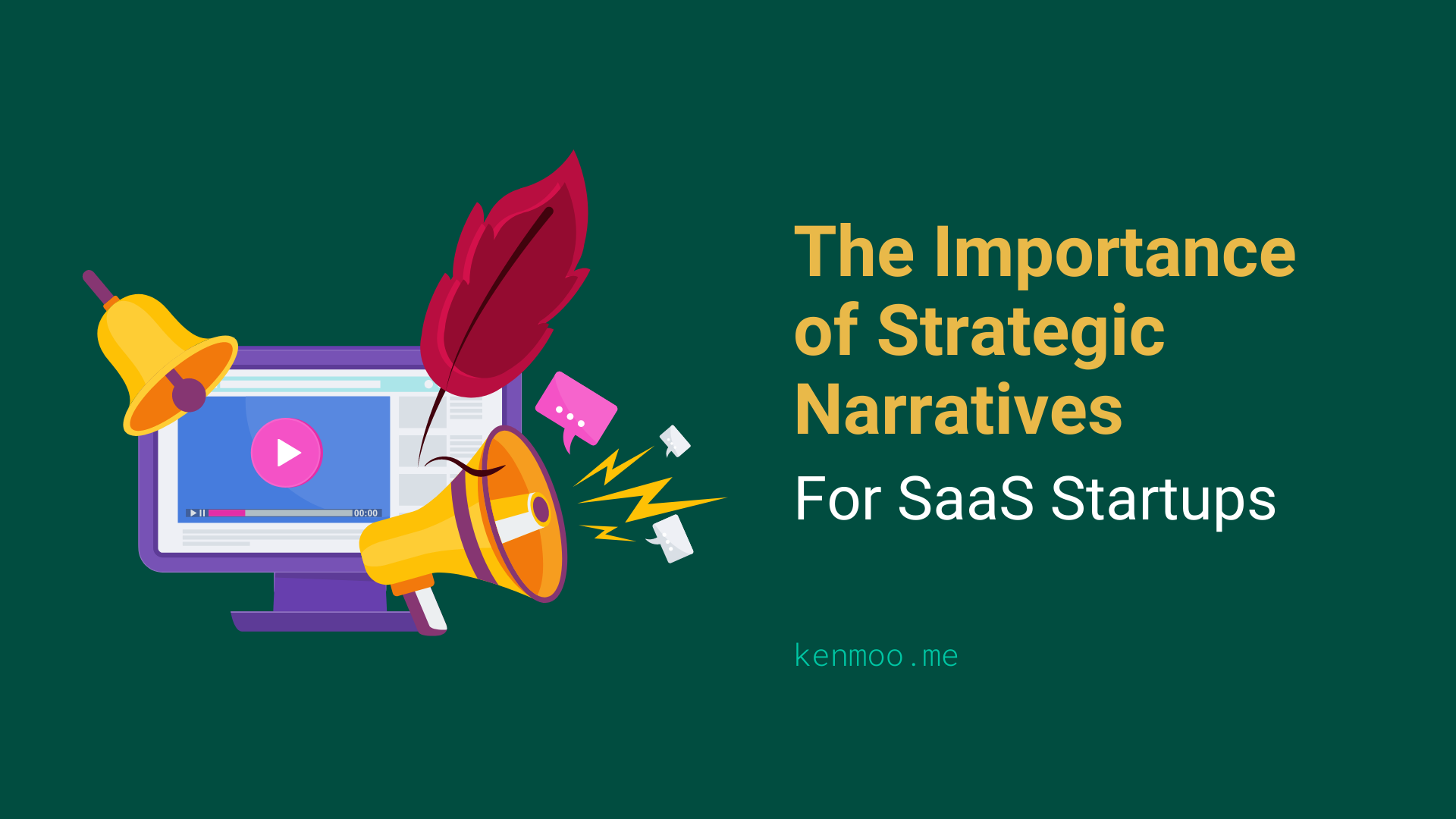