A Sharing and Communication Platform for Influencers, Educators, and Startups

The meteoric rise of Circle since bursting onto the scene a little over 2 years ago has coincided with the rise in demand for building communities outside of traditional platforms such as Facebook, forums.

Since then, they and Mighty Networks have become 2 of the most popular third party platforms to build your own community.

The problem: Limited exposures on Facebook, and forums are dated (and they don’t usually come with a mobile app).

Heartbeat follows the visual aesthetic styling of Circle, so you can see the resemblance right after login: Minimal design, Channel lists on the left.

On top of that, they recognized the need for a more structured content and have added Docs to allow sharing evergreen content, with nested links for better management.

With the upcoming Courses feature with tracked progress, Heartbeat is shaping up to be a solid option that’s ready to go out of the box.

Migration to a New Platform

Probably one of the two biggest hurdles when moving a community over to a new platform, the other hurdle being the content and the community itself.

This looks like a pretty straightforward process to import existing communities from Slack or Circle.

You CAN build courses and evergreen content with Circle, but there is currently no dedicated features on the platform.

The way you can set them up is by customizing the layout for each space. Eg: a Card layout would be best for courses, while Feed (Facebook style layout) or List (forum style layout) are more suitable for the spaces where discussions are happening.

Without being able to see the upcoming Courses feature from Heartbeat, at this point, Mighty Networks has the best structure for courses hands down.

You can pick courses to join from what’s available inside the community. Then you can start the course, pick your lessons, watch/read through them and mark each lesson as complete, pretty much what you would expect to have as a standard course platform. Heartbeat has a dedicated Docs featured for structured content when you want to make certain things more “sticky” and apart from the regular discussions. I really like this feature because it allows us to to pin all the important “knowledge base” type content where people can easily find and access them. In Docs, you can have

Formatting texts inside the Heartbeat doc

You can integrate your Stripe account which would allow you to create paid memberships, groups & ticketed events. PayPal is not here yet but it has been mentioned in the feature request.

So what can you personalize inside Heartbeat?

Turns out, quite a lot of things:

There are quite a number of integrations already available such as Zoom, Google Calendar,… but the most notable ones have to be

There is a plethora of metrics to please some of the most difficult people 😁 Personally, these are some of the few I would look at:

Both Circle and Mighty Networks have mobile apps and their web versions (which can be turned into PWA on desktop), but no desktop app at this point.

Heartbeat has both mobile and desktop apps right out of the gate. However, with it being fairly new, the apps from Heartbeats aren’t without bugs. I have noticed quite a few inconsistent details across the platforms: their desktop app, web and mobile apps. The good thing is most of these are minor details that the team should be able to resolve eventually.

Improvements and the Near Future Updates

Like any other tools at this stage, there are always bound to be bugs and issues.

I’ve spent 10 days creating and running a community with some 20+ members to test different features and below are some of the most pressing current issues/needs.

It’s important to also pay attention to the response of the team on these issues as well.

One of the most obvious ways to judge businesses launching LTDs is the speed of development, especially during the launch campaign.

Here are 3 of the most recent updates since they came onto Appsumo:

April 11 – $mention: Allows you to link a Doc or any upcoming Events in your community.

April 14 – Video embeds: They have added embed support for the following video providers:

These are solid & very important updates that will surely improves the user experience and allow further customization in communities.

The biggest one without doubt that has been confirmed to be released later in April is Courses.

It is hands down one of the main features people look for in communities, so that they can have the course and community on the same platform.

Progress tracker and analytics for every member. One thing that’s probably missing is the certificates, which I have suggested to them.

There is still some way for Heartbeat to fully convince people when thinking about migrating their communities over, but with the current feature set, speed of development and the way the team, including the co-founders handle feedback, I’m willing to bet that Heartbeat will be a very popular name in the space within 12-18 months.

At this point, they already look like one of the best community tools that has ever come onto AppSumo (with Tribe being the other heavyweight). 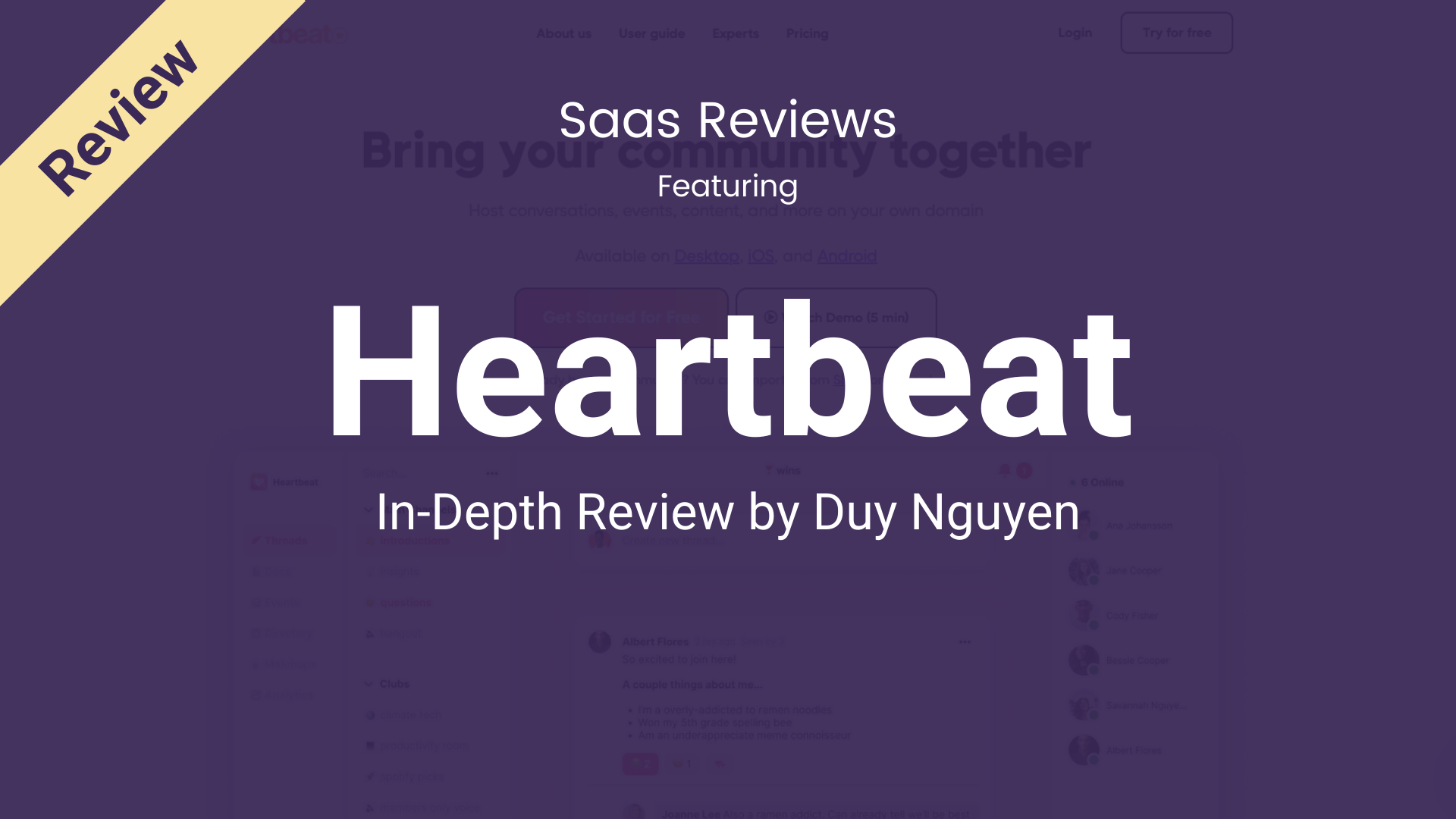