Growth VS Profit: Which is Better When It Comes to SaaS A lot of entrepreneurs wrestle with this question as they strategize and plan for their businesses. How nice would it be if you could maximize both at the same time?

Unfortunately, it’s impossible. If you’re maximizing profits, that means you’re keeping money that you could otherwise invest for your company’s growth.

Both are important in making a business successful. And there are a lot of things to consider in choosing which to prioritize.

But first, let’s talk about profit and growth one by one.

Profit in the SaaS Business

Profit is the net revenue that you have after taking out all the expenses you need to run your company. It’s the primary goal for any business that wants to last.

Profit is the money that goes directly to the owners and shareholders of a business. It can also be reinvested in the company. In fact, for businesses that don’t have any investor or any kind of funding, it may be the only source of new capital.

Growth in the SaaS Industry

Growth is basically making your business bigger. You grow by expanding your market, hiring more people, and getting more sales.

Business growth takes a lot of analysis and strategy. You have to know the current state of your company. You need to identify weak points that you can improve and the opportunities that you can take advantage of. Not to mention the need for sales forecasting.

One of the SaaS growth metrics usually used to measure the strength of a business is the Growth Efficiency Index (GEI). It measures how effective you are at growing your revenue.

To calculate it, you need to look at your Revenue Acquisition Cost (RAC) and Annual Contract Value (ACV).

The RAC is the total of your expenses for sales and marketing divided by the number of your existing customers. While the ACV is the revenue you would generate per customer in a year.

GEI is calculated using this formula:

In simpler terms, GEI tells you how much it costs to earn $1. If it’s more than 1, you need to reevaluate your sales and marketing efforts. But if it’s lower, then you’re on the right track.

The Relationship Between Profit and Growth

Profitability and growth are both essential to a long-lasting company. In fact, they work together towards the long-term success of your SaaS business.

Profit is essential for your company’s financial survival. Like I said earlier, it can also be reinvested for business growth. Consequently, sustainable growth leads to more profit and long-term success.

Businesses have different ways to balance profitability and growth. After all, profits are not the only source of capital that you can put into growth. You can have investors and venture capital as a source of funds. On top of that, you can have your company listed in the stock market.

Still, to leverage both of these options, you need to show solid plans for growth and long-term profitability. Consider that there are also different types of investors. Some favor a high growth rate, while some are focused on keeping profits.

Moreover, your business should have gained some degree of popularity before you consider putting up an initial public offering (IPO) in the stock market. You need to attract traders and investors. You need to make a big fuss about your IPO.

There are some good reasons to prioritize a wide profit margin without considering your growth. The simplest one would be that the business is simply a means to provide.

Imagine a family-run restaurant in a small town. It gets all the customers and profits that it needs to keep the business running and provide for the family. And the owner is satisfied with it.

But we’re dealing in SaaS, where you have a global market. Your potential for growth is not bound by geographic boundaries.

So let’s look at some reasons to favor profitability despite knowing that potential for growth.

If the pandemic has taught us anything about the economy, it’s that you can never predict what is going to happen. The global health crisis turned into an economic downturn. And businesses were forced to favor profit rather than growth just to survive.

Moreover, companies were forced to go to the stock market with an IPO. For some of them, the IPO offerings were desperate attempts to secure more funds to ensure their survival.

Optimally, the best time to enter the stock market is when it’s strong and when traders and investors are willing to buy stocks. Having more money in the bank removes the pressure to offer an IPO or even sell your business in poor economic conditions.

Appeal To Investors and Acquisition Offers

Profitability shows that a business is strong. For the short term, at least.
This kind of strength attracts investors.

What’s more, it’s also appealing to larger corporate entities that may offer to buy your business or merge with it. These are all good opportunities for growth and stability without the need to compromise profits.

Having more money in the bank also gives you more negotiating power when dealing with investors, buyers, or potential partners. Being the financially stronger party can be your key to turning the terms in your favor.

Still, focus on profits has its potential setbacks. Remember that it also means giving little regard for growth. And that can have its consequences.

If you’re limiting your SaaS growth rate, you are also putting a cap on your revenue growth.

For example, you have one hundred customers paying $100 per month and your overhead costs are within $5,000 per month. That gives you a net income of $5,000. No more, no less.

That’s assuming that your existing customers stay with you forever.
But they won’t.

As sad as customer churn is, it’s still a reality in any SaaS company. And it will slow down your increase in revenue.

Slow growth as a result of prioritizing profit can also leave you vulnerable to large competitors.

Imagine launching an accounting software when QuickBooks and Xero are already dominating the market. Or a fledgling CRM software taking on HubSpot or Salesforce.

These are popular and well-established companies. Competing on their level would take a lot of growth.

Unless you have something very unique that makes customers choose you, these big companies will overshadow you.

The ability to improve your product according to customer needs is essential to the long-term success of any SaaS business.

It takes customer feedback, design, and even recruiting new teammates to stay relevant in your market.

But focusing on profit limits your resources for product development.

There are many ways you can lower costs and maximize your profit margin. For SaaS, it’s generally about keeping costs down and keeping the revenue coming.

Let’s talk about a few of them in detail.

Cohley is one of the top growing SaaS companies that focused on profit. It’s a platform where brands can connect with content creators and avail their services.

Despite raising only $1.5 million in venture capital, its Annual Run Rate (ARR) has increased by 375% in 2019. This profitability has attracted even more investors. This year, Cohley has an ARR of $3.9 million.

Cohley Founder Tom Logan says that this success is due to their efficiency with their capital. He also said that sustainability is the key. According to him, he and his stakeholders wanted a product that was not subject to short economic changes.

True enough, Cohley did not just survive the pandemic. It thrived.

Startups usually go all out for a high growth rate for their businesses. They reinvest the bulk of their profits to scale their operations.

There are some good reasons to do so. After all, you have a large pool of well-established competitors to catch up to.

But it can be risky. If you’re planning to minimize your profits to foster growth, make sure that you are in a good economic environment.

As a SaaS startup, you may find yourself wondering how to take on the tech giants that are dominating your market now.

Well, you need sustainable growth to move further up in the race. You need to establish your unique value proposition and find a good product-market fit. Scaling your business is much more sound when you have established these things.

Whether it’s through boosting your sales, marketing, or product development, expanding your market is a must in gaining a competitive advantage.

Attractiveness To Investors And Media

Much like profitability, business growth is also attractive to investors. Remember that growth means that more and more people want to buy your product and you can expect increased profit in the future. Investors want that.

Growth also builds confidence in your existing investors, increasing your chances of securing even more funding from them.

Moreover, it’s not just the investors’ attention that you want. Attracting media attention would be a big leap to your brand building. Rapid growth will put you in the ears of SaaS blogs and experts. And they will, in turn, feature your business to their followers.

Even with the long-term benefits of focusing on growth it still has its risks. If you’re looking to focus your resources on growth, watch out for these:

When you are allotting resources for growth, you may go through some months or years without profit. You might even experience negative cash flow from time to time.

That’s why it’s important to always keep track of your GEI. It’s your main indicator of whether or not your growth strategy is still doing what it’s supposed to.

Keeping less profit limits your financial power in the event of an economic downturn.

A lot of businesses learned that the hard way when the pandemic hit the world. Many of them have resorted to cutting costs by laying off and scaling their operations down.

If you’re growing a business in a shaky economy, it would still be best to prepare for an economic decline by keeping some emergency funds.

Now, there is no such thing as a skeleton key to growing a business. You need to formulate your own strategy and find out what would work for your business model.
But here are some SaaS growth hacks that can get you started:

Let me tell you a story about a man named Jeff Bezos. When he founded Amazon, he did not focus on profitability. He believed that there were limitless growth possibilities in e-commerce at the time.

Instead of accumulating his profits, he put his resources into building a big company that would grab a huge chunk of the market.

In its earlier years, Amazon didn’t even make any profit. It wasn’t until the final quarter of 2001, more than seven years after its founding, that it saw its first profit.
In all that time, Bezos focused on growth.

This level of growth attracted a lot of venture capitalists. On top of that, Amazon joined NASDAQ in 1997. By 1998, Amazon had $600 million in exchange. Still, Amazon used those funds for its aggressive growth and acquisition strategy.

Now, Amazon is one of the biggest conglomerates in the world. And its founder is the richest man on the planet.

Since profit is essential to the survival of any business, it’s not a matter of if you will focus on profit. It’s a matter of when.

In the same way, because growth is the key to long-term stability and success, you will have to focus on it at some point.

It’s not a matter of growth VS profit in SaaS. Both are essential.

Profit is needed for growth. Growth brings in more profit.

For more strategies on scaling your SaaS business, click here. 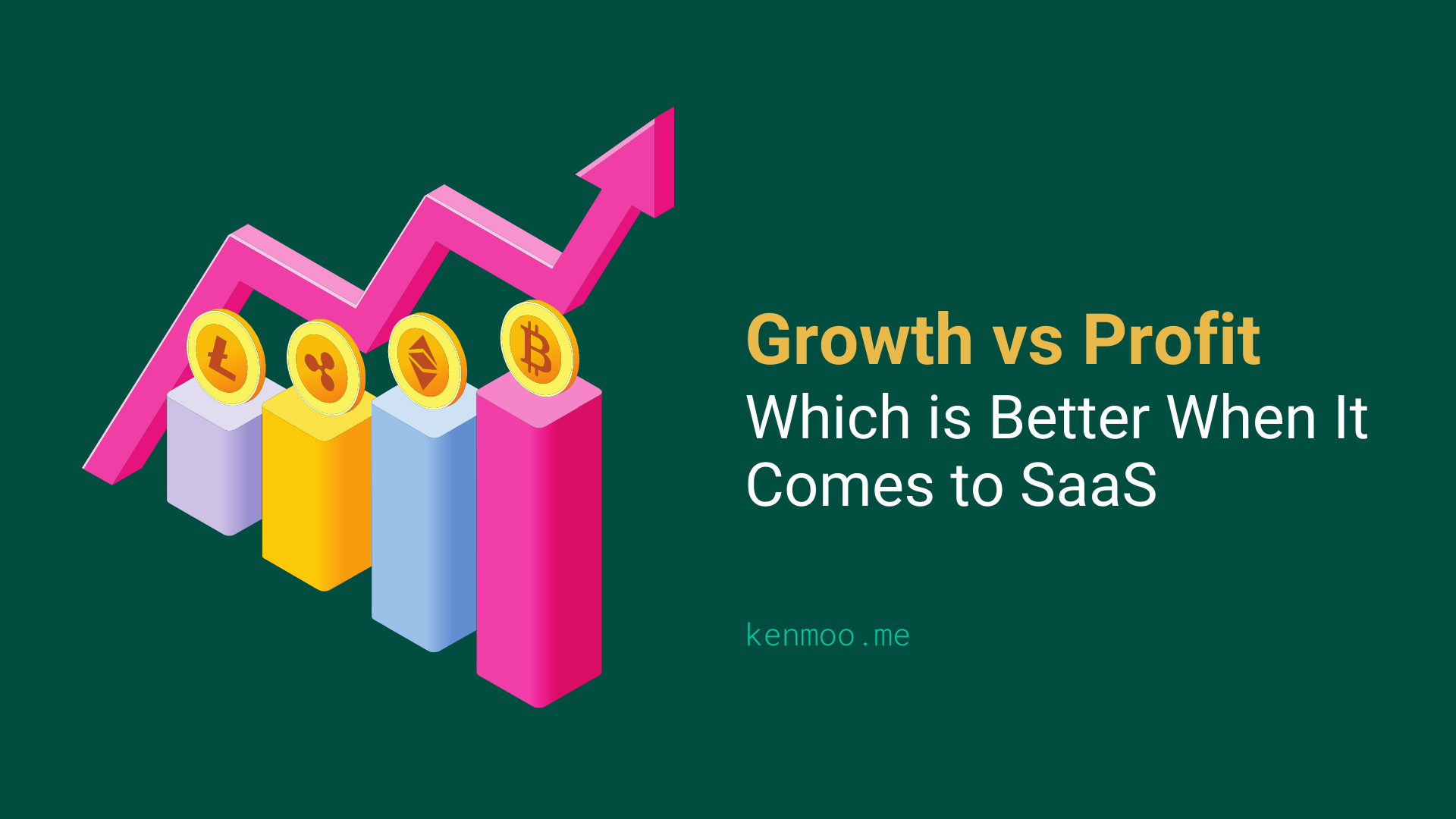