BerryCast is an app that allows you to simultaneously record your screen, camera, and audio, allowing you to produce online videos that correspond to in-person explanations.

BerryCast is an easy-to-use video-making tool that doesn’t require any technical know-how. Seamlessly record your video and send it with your clients or coworkers via Outlook, Microsoft Teams, or your personalized URL!

Blog Content hide
BerryCast Pricing Overview
BerryCast Features and Benefits
Who is Berrycast For?
Things to Note About BerryCast
BerryCast Alternatives
User Reviews for BerryCast
Find more Software Lifetime Deals with us!
Get fresh updates in your inbox 👇

Berrycast’s monthly price starts at $9.9 USD for a “Pro” account that’s perfect for professionals and businesses. The price scales up if you want to enjoy unlimited video recordings, video editing, password protection, upload your videos, custom branding and views.

Alternatively, Berrycast is offering a limited lifetime deal on Appsumo which starts at $129 for a one-time code deal (not stackable). Find out more about Berrycast’s lifetime deal below. ✅  Full screen recording and Selected-area recording allows you to easily send messages and tutorials to your team members.

✅  Internal audio (for Windows only) – Share sound within your screen recordings.

✅  Password protection – Secure your screen recordings to team members by protecting your videos with passwords.

✅  BerryCast allows you to see who watched your video and the number of views.

✅  Upload your video on BerryCast, or upload on different platfoms.

Who is Berrycast For?

Berrycast is a new way for salespeople, teachers, and support teams that want to enhance communications, lessons, and presentations with video. It’s also the perfect solution if you’re looking to send videos that use your own branding to promote your work, get feedback, and facilitate collaboration through visual explanations.

Things to Note About BerryCast

👉  Some buyers of the LTD feel that there are multiple occurrence of buffering, slow upload time, and small delay between audio and webcam.

I used this for 30 minutes I knew I’ve found a Loom replacement. I like the way they have done things subtly different and have made the main things really easy like recording. Upload speed was quick for my slow connection and the functionality was great. It has everything I need.

Yes, there’s a couple of bugs, video playback is a bit jerky for me at times and click and drag didn’t work too well, cutting off half the selected window, that said when you use BerryCast you get the feeling that it’s built well and updates will come in time.

I love it for creating screen recordings to show my clients certain website features, but when it comes to capturing the webcam as well, it sometimes becomes blurry and the sound (talking) does not keep up with the image.

This tool is fantastic, worked straight out of the box. CNAME set up was quick and painless too.

Some things that are nice:

1. You can move the video of the presenter’s webcam around. E.g. if doing a walk through, and you don’t want to obscure a bit of the screen, you can move it

2. You can alternate between “full screen” webcam (i.e. just the presenter) and “talking head” (i.e. presenter and screen share).

3. There are useful hotkeys. Look these up, you’ll need them, particularly the one for hiding the control bar (as it appears in the recordings 😃)

I can imagine using this for quick video walkthroughs (you know those emails, particularly where someone is in a different timezone so you can’t easily meet, and you just want to “show” something quickly rather than explain with words)

Also it’d be useful for recording presentations, and many things besides.

If you’re on the fence, I’d say (based on my experience) buy it. 10 users at this price is just amazing.

I bought this deal a few weeks ago and at first, it was really slow.

I create a lot of tutorial and walkthrough videos for my clients and team, so playback speed and reliability is very important.

After letting this deal sit for a while, I revisited it a few days ago and used the desktop app instead of the web app. Thankfully, the desktop version worked faster, so I started using berrycast moving forward, and that’s when I switched from Loom.

However, earlier today, some videos I recorded failed to upload and for the ones that did make it, the playback was too slow. In some cases, the video would fail to load completely and I’ll just see the “failed to load” error. According the error message, it’s either the “server failed to load” or the “format is not supported.”

Nothing in my process and internet connection has changed since I started using Berrycast, so I’m concerned why this happened.

Again, reliability and playback speed is important for me since I’ll be sharing demos/walkthroughs a lot. What assurances can we get that this won’t be problem?

just say this tool is amazing.

this my first rating on appsumo, from many I’ve buy before.

Join our Facebook group of more than 6000 entrepreneurs to discuss about software lifetime deals and find more amazing deals like this!

Blog Content hide
BerryCast Pricing Overview
BerryCast Features and Benefits
Who is Berrycast For?
Things to Note About BerryCast
BerryCast Alternatives
User Reviews for BerryCast
Find more Software Lifetime Deals with us!
Get fresh updates in your inbox 👇 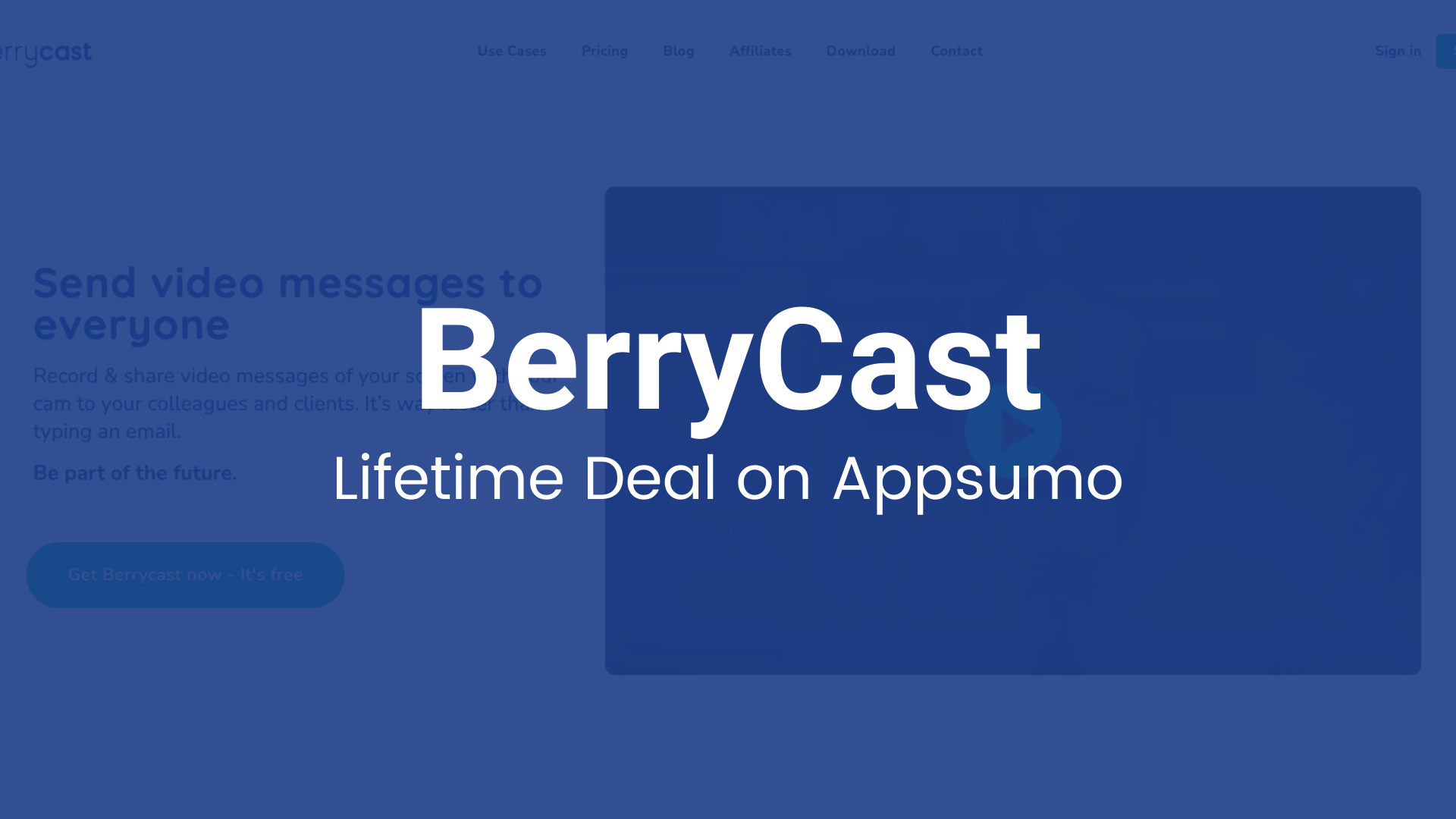